Last weekend I had the opportunity to see IT with the hubby and I didn’t take him up on his offer. While he was watching IT, I wanted to give some love to the other movie released as IT’s competition, Home Again. That movie I loved and thought was absolutely adorable. We all know that Home Again wasn’t going to hold a candle to IT.

After hearing how my hubby and my friends loved the movie, I decided to check IT out for myself. I hate gory films but I love horror/thriller. Give me a great Scream or scary Halloween and life is good. On a side note, I’m over the moon with excitement that Jamie Lee Curtis will be in the new Halloween film, coming out next Fall. I loved her return for Halloween H20. Maybe she’ll rectify her Halloween Resurrection mistake. Anyway, I digress.

I watched the original IT miniseries in 1990 (27 years later IT returns, interesting ploy there Warner Bros.) I feel that the 1990 miniseries was scarier than the movie version. I jumped once and IT wasn’t even a full jump, IT was more of a twitch. I think what was so terrifying about the 1990 version of IT was that I watched as a little girl CHILD. What is IT after? Children’s fears. Knowing the ending and knowing that IT is a giant alien spider, doesn’t make IT all that terrifying. I cried in this movie, can you believe IT!  I laughed a few times too. I pains me to say IT, but IT was’t all that scary. The Conjuring, now that was a scary movie (the original, not the sequel).

I don’t think I can read the book. The insinuations already make me feel sick to my stomach. I don’t need to read IT in print, where everything is described in detail.  Anyway, I’m reading Joe Hill’s (Stephen King’s son) NOS4A2. IT’s taking me a long time to get though because IT makes me nervous to read (so I read a little bit, then stop, then start again and repeat the process)

Bill Skarsgard was good as Pennywise, but he’s attractive in real life, so he’s not that scary. His voice was the scariest thing about him. Tim Curry was good in the role, but IT‘s been forever since I watched the 1990 version, and I can’t remember how much he was in the movie.  Don’t get me wrong, I don’t like clowns, but to me, they’re more laughable than they are scary. When I think of clowns, I think of Circus Circus in Vegas, and I always had fun there when I was little. The whole “killer clown” craze  from last year was just one long Halloween prank to get everyone ready for the movie (I loved watching those videos online).

My hubby didn’t make me go alone, that was nice. He watched some YouTube videos explaining the Easter Eggs throughout the film, and wanted to watch IT again.

Overall the director, Andy Muschiette, did a good job with the film. I enjoyed IT a lot. Would I see IT again, no. Would I buy IT on DVD, no. I’m glad I saw IT and I’m glad IT wasn’t gory. Even though IT wasn’t super gory, this is definitely not a children’s movie. IT is rated R for a reason. I hope parents are smart enough not to take their kids.

Because IT is almost Fall (and Fall is the time for scary things), and I’m feeling some nostalgia for 1990, IT gets 4 out of 5 Pink Gerber Daisies. I hope IT enjoys them!! I tried to capitalize and bold, and use a lot of ITs. I hope I got them all.  Yes, I wrote this way on purpose tonight, even using the redundant “little girl CHILD.” 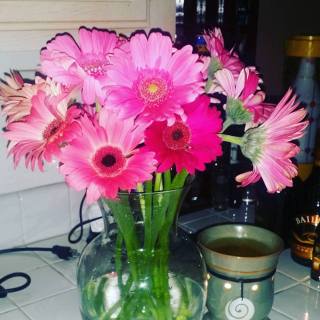