This year we’re not gifted with just one Superhero movie we get 5 or 6 if you count Suicide Squad and Rogue One.  So far Captain American: Civil War has been my favorite and with the release of X-Men Apocalypse, it’s going to pretty much stay that way.

While this probably the better of the three in the new trilogy, I’m annoyed at the continuity timeline. I’m aware that the last X-Men film pretty much rewrote the entire original trilogy, but I have so many more questions than answers after watching this and that’s annoying.

First off, why isn’t Magneto older? Isn’t he like 12 during WWII. He was in Auschwitz, this movie takes place in 1983, wouldn’t he be like close to 50? Ian McKellen was about the right age back in 2000. Magneto can age that much and turn into Ian McKellen’s Magneto in less than 20 years?

Another problem, Scott Summers is a teen in X-Men Origins: Wolverine. That movie takes place in the 70’s, but he’s a teen again in 1983.? He was one of the kids who was rescued from the island at the end of the film by a HORRIBLE CGI Patrick Stewart, who might I add was already bald in the 1970’s (per that film). Miraculously, James McAvoy regained a full head of hair in 1983 oh and could walk too. The walking could easily be explained by the drugs he was taking via the X-Men: Days of Future Past.

Let’s not forget that in the end of X-Men: The Last Stand, a walking, bald Professor Xavier and an old Magneto went to visit Jean Grey. I’m not as angry at the lack of continuity between the first trilogy and the second, because X-Men: Days of Future Past changed the timeline.

This is one of my biggest pet peeves…. Stryker!!!He was an old man on X-Men Origins: Wolverine set in the 1970’s, a young guy in X-Men: Days of Future Past, set in the 1970’s and the same young guy in X-Men Apocalypse, set in 1983. So. how can he be old and young in the same decade? When I say old, he’s like very old. Days of Future Past couldn’t have changed the timeline that much.

Another continuity issue, but it doesn’t actually relate to this movie, Emma Frost. She was on the island, as a teen with Scott, but them was an adult in X-Men: First Class??? Explain that to me…

Wolverine was a part of Team X in the 1970’s and yet his skeletal structure was changed in 1983, according to this film.

This movie wasn’t as bad as the critics made it out it out to be. I love seeing Hugh Jackman back as Wolverine, I know we don’t get him for much longer. Watching online, I’m worried about where they’re taking his character in his final outing as Wolverine. I don’t want to see a Rated-R “Old Man Logan” Western.

There were some comic relief moments. Why doesn’t Raven talk in the original trilogy? I loved Quicksilver, Jean, Scott and Nightcrawler. Wasn’t Angel a Senator’s teen son in Last Stand, there’s that continuity thing again. I loved it when Scott said, “I hope we don’t see him again,” referring to Wolverine. I liked Jean. It was a bit creepy to see an old Logan and a teen Jean, considering in just a few years he’s going to have the hots for her.

I think that Oscar Isaac was a really cool addition to the cast. I know that my hubby loves his acting style. I think he’s ok. I liked the character of Apocalypse and the first 30 minutes of the movie were very entertaining. I wasn’t confused at all. I felt like more could have been done with the character, but I didn’t feel like the movie was rushed either. Days of Future Past was too rushed for me.

I really liked Eric/Magneto. I don’t blame him one bit for his rage. His entire family was taken from him, not once, but twice. So was his daughter supposed to be “Scarlet Witch”?

I didn’t understand the really lame end credit scene. I felt like it was just added in there at the last minute with no thought whatsoever. I felt cheated. If Apocalypse is dead and he’s in cahoots with Mr. Sinister, I hope they revive Apocalypse.

Overall this wasn’t a horrible film. I liked it and as soon as it’s $5 at Target, it’ll be added to my comic book film collection. Too bad none of the Avengers go on sale.

I would rate this film 3.5 Pink Gerber Daisies out of 5. Those continuity issues just bug me!!! More questions and not enough answers. I need the answers, that’s how my analytical brain works. 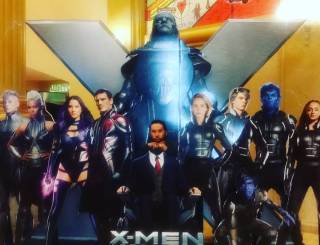