If you haven’t seen The Secret Life of Pets and you don’t want to be spoiled, stop reading now. Don’t say I didn’t warn you.

My husband and I go to work everyday, and everyday, I wonder what exactly do my dogs do while we’re gone? What trouble do they get themselves into? The Secret Life of Pets sets out to answer those exact questions. (Well sort of, remember it’s an animated movie.) The Secret Life of Pets, released on July 8th, is an animated film from the makers of Despicable Me and Minions.

I must say that this is one of the cutest movies I’ve seen this summer. I was anxious to see this movie after watching the trailer months ago.  This movie was so much fun and had quite a few laugh-out-loud moments.

The storyline was super sweet. Katie gets puppy Max, a “small dog”. Years later she adopts the large and goofy Duke from the pound, much to Max’s chagrin. Max looks for ways to get rid of Duke, who has come in and upset Max’s happy existence. No longer is Max allowed to share Katie’s bed. To the floor he goes, next to Duke. I know, this doesn’t sound too sweet just yet, but it gets better.

While out for a walk, Duke seeks his revenge against Max. Both he and Max find themselves in some precarious circumstances. They must, work together as friends, to escape feral cats, a street gang of displaced pets and the dog catchers close on their “tails”, chasing them through the mean streets of Manhattan. Hilarity ensues, especially with Kevin Hart as the voice of Snowball, the white bunny and leader of the New York street gang.

With the help of Max’s pet friends, Gidget, Chloe, Mel and a few others, both Duke and Max find their way back home to Katie and by the end of the movie, they become best buds. Max knows that without him and Katie, Duke would be all alone, without a family to love.

While the main story focuses on Max and Duke, some of the supporting characters definitely stole the show. Gidget, voiced by Jenny Slate, is a tiny white Pomeranian who looks more like a Fefe than a Gidget, is by far, my favorite “Pet”. She has a mad crush on Max and is the first to notice Max and Duke missing. She will stop at nothing to try to get them back. She even enlists the help of Tiberius, the hawk chained up on the roof, who at first tries to eat her. She’s the pampered pet with an edge. Her “Kung-Fu panda dog” attack on the animal street gang was the best. The small things that distract the pets’ were hilarious, think “Dug” in Up and “squirrel!” because, yes, there were quite a few scenes like that…..”ball”. But that’s how dogs are, right? You have their attention for a minute and then bam, they find something else to entertain them.

I’m going to be honest, I wasn’t familiar with many of the actors who voiced these characters. I did know Ellie Kemper (Katie), because I absolutely love the Netflix show, The Unbreakable Kimmy Schmidt, Dana Carvey (Pops), Eric Stonestreet (Duke), Albert Brooks (Tiberius), Lake Bell (Chloe) and of course Kevin Hart (Snowball). I had no clue who Louis C.K (Max) and Jenny Slate (Gidget) were, but like I said earlier, Gidget was by far my favorite character and I’m excited to see what Jenny Slate will do next. I heard a rumor she’s dating “Captain America”, good for her! Albert Brooks also voiced Marlin in Finding Dory, released earlier this summer. Another one of my favorite movies of the year so far.

I almost found that this animated film was more for adults than for kids. I asked my husband, “was this a kid’s film?” He said he didn’t think so. Some of the jokes were more adult oriented. The jokes weren’t bad and would probably go over the heads of young babes, but there were some innuendos that adults would definitely catch on to.

One of my fur babies snuck out of the house once. She followed my husband out of the gate, he didn’t know. I was working on the computer, when all of a sudden I heard a familiar cry. I looked out the window and who do I see? My Mia. Thankfully her adventure wasn’t as intense as the Max and Duke’s. She didn’t she have to run away from any street gang or fight feral cats

I knew this movie was right up my alley. I’m a pet owner and my two dogs stay home alone while I’m at work. It breaks my heart when I have to leave them home alone. I love my job and I work so that we can have a better life, but I know my Mia has separation anxiety. Sometimes shoes and clothes get destroyed. It would be interesting to set up a camera to see what really goes on in my house when I’m gone.  At the end of the day, I guess that old saying, “While the cat’s away, the mice will play” still holds true.


I enjoyed this movie, it was funny and sweet. If you love animals and are curious to see what they do when they’re home alone, go to see it. This is a film that both adults and children can enjoy. The Secret Life of Pets gets 4 out of 5 Pink Gerber Daisies. 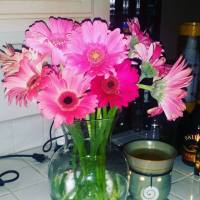