I saw snow fall for the first time and it was the most magical thing ever. Don’t get me wrong, I’ve seen snow on the ground before, in Big Bear and New York, but being a Socal native, I’ve never seen a snowfall. Every year my husband and I travel out of state. The last two years we traveled to warmer climates, this year we went to Chicago and had a fantastic time.

I love the big city. I love the shopping, the art, the food and the nightlife. I love the ease of getting around. Chicago was one of the last “big cities” for me to travel to and it didn’t disappoint. Be prepared, public restrooms rarely have seat covers, there are only hand driers (these spread germs and spray feces on your face) and charge for bags.

The views from our room at the Wyndham Grand Riverfront were amazing. I love staying in the timeshare. I feel like I’m at home. Of course you have to deal with the constant sales calls. My hubs and I just ignore them.

Chicago is known for it’s stuffed deep dish pizza. I’m not a fan of deep dish myself, but when in Rome. Our first stop was Bella Bacinos Italian Restaurant. The pizza was good and I enjoyed it. We also had deep dish at Giordano’s. This is supposed to be a popular tourist destination. By the end of the trip, I was tired of pizza.

The first thing we did was brave the freezing temperature to go on a sightseeing tour of Chicago’s architecture on Wendella’s boat tours. I enjoyed learning about the city’s history. The tickets were a bit pricey, but the 75 minute ride was well worth it.

Tax in the city is ridiculously high, be forewarned. It’s 10% in the city. I didn’t shop a lot. I didn’t have room in my suitcases anyway. I had to bring heavy winter coats. You see, because I live in California, it takes my body a few days to adjust to the cold weather, and oh boy was it cold. I thought it was colder than my trip to Massachusetts in November. I don’t think that temps reached higher than 34 degrees. 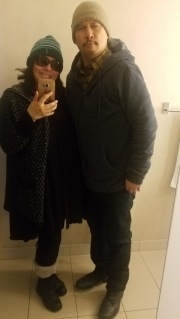 We spent a lot of time going to the museums. It was a cultural trip. We first went to The Museum of Contemporary Art. I wasn’t a fan. Looking back, I wish we would have gone to the Art Institute of Chicago. It holds one of my favorite van Gogh’s.

We also visited one of the public libraries in the city. We went to the Adler Planetarium and Shedd Aquarium. Adler and Shedd were both located near each other. If you have the time, it’s easier to kill two birds with one stone. Since we didn’t leave our room before noon any day that we were there, we had to make two trips to the area. Take the 146 bus, not Uber.  I also suggest getting a city pass. It gets you to the head of the line in most places. You get tickets to The Field Museum, The Museum of Science and Industry, Shedd Aquarium, Willis Tower, and either the Adler Planetarium or The Art Institute of Chicago, but not both. 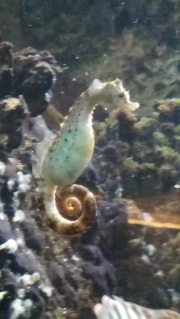 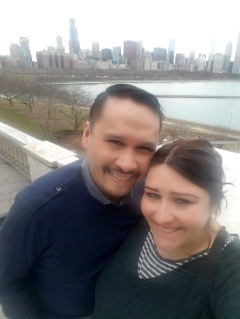 Public transportation makes getting around the city a travelers dream. We took the Metro to Wrigley Field. We couldn’t go on a tour of the stadium, but we had a good time walking around the Wrigley area. I suggest getting a metro pass for the week. They aren’t that expensive and can be used on bus fare too. Parking in the city is ridiculously expensive too, that’s why we didn’t rent a car, parking would have cost us $66 a night. 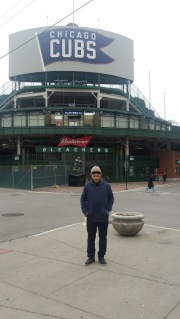 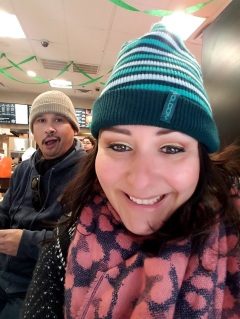 One night we went on a “Gangsters and Ghosts”  tour of the city. It was ok. I think I would have preferred to also go on just a gangster tour and had drinks at a former speakeasy.  I didn’t find that there was much of either gangster or ghost on the tour, so we were slightly disappointed. I had a good time nonetheless, looking at the beautiful historical sites. Our tour guide showed us the beginning of Route 66. Now I can say I’ve been to the beginning and end of famous Route 66. 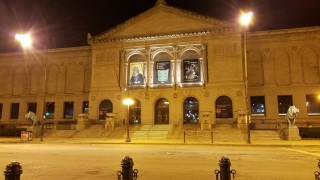 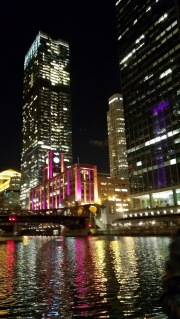 Did you know that Sears Tower is no longer called Sears Tower? It’s called Willis Tower now. It’s super sad, because the last Sears store in the city is closing down this year. I think I would have liked to visit the Hancock building and “Tilt”. The day we went, it was closed for a private party and a visibility of zero.  From the Willis Tower, you can see three states on a clear day; Michigan, Indiana and Wisconsin.

Navy Pier was another tourist trap. We had a lovely dinner at a seafood restaurant called Riva’s on the pier, but the pier itself is geared more towards kids. They have a children’s museum, and arcade. There was a lot of remodeling going on, and it probably wasn’t the best season to visit the pier. It did snow the night we were there.

The shopping is of course amazing. I feel like if I can get it back home, I shouldn’t be buying it on vacation. Michigan Ave. has Magnificent Mile. A mile of upscale shops on both sides of the street. We visited two Macy stores and two Sephoras. I just loved to window shop.

I love movie While You Were Sleeping. To be able to watch that film and identify the locations is really cool. Of course we heard about Ferris Bueller’s Day Off, which ironically was also filmed in Long Beach. I was wishing that there was some sort of John Hugh’s tour, but sadly, there wasn’t.

The city views were amazing. There was so much to do, I don’t feel that we even scratched a portion of the surface. Oh well, it looks like I’ll have to travel back to this gorgeous city!! 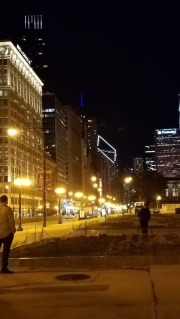 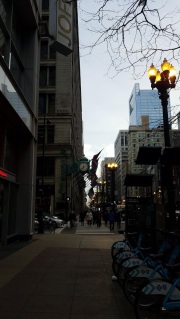 One of my dreams has always been to work in the media. It was a privilege to see the Tribune building. 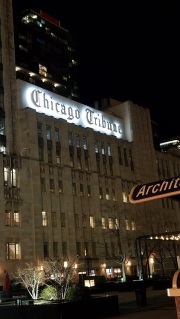 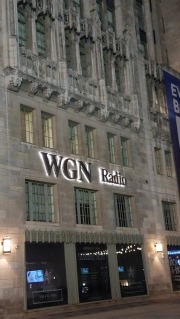 Overall, we had an amazing, cold adventure in the city. I was sad to have it come to an end, but life isn’t a vacation. now, we can’t wait to start planning our next destination.