A few weeks ago I was invited to watch Solo and then attend the Han Solo press conference in Pasadena. Let me start off by saying how much I hated The Last Jedi. Fans of the original Star Wars franchise were, made to feel ashamed and stupid for not “understanding” the film. The way they handled the Luke Skywalker character was shameful. (And) Disney is still using Rian Johnson to create even more Star Wars films, WHY???

Fast forward to May 25th. I’d heard all the rumors, watched all the videos, read all the stories. Solo: A Star Wars Story, was going to be terrible. You know what, it actually wasn’t. Maybe it was the fact that I went into the theater with much lower expectations, but I really liked this movie. To make one thing clear, I’m not saying I loved this film, or that I liked it because I went to the press junket. I actually also went to the press junket for The Last Jedi and I panned that movie in a review. I loved the way the cast interacted with each other. It felt like they actually got along. I thought everyone had amazing chemistry and the story line was good. There were some new characters and I was interested in learning about them.

Alden Ehrenreich is actually a lot of fun as Han Solo. He may not look like Harrison Ford, but he’s cute, and he has this adorable twinkle in his eye and adorable smirk on his face. I also loved Donald Glover, as Lando Calrissian. The two of them together is amazing. Unfortunately, the next time we see them together is in Empire Strikes Back, so a sequel with the two would be out of the question. Chewie is amazing. All of the actors in this film are good. I really liked what the writers and Ron Howard did with Solo. We even get to see some of the events mentioned in A New Hope through Return of the Jedi. For that reason alone, I was pleased with the film. They didn’t forget about the fans.

Qi’ra, Solo’s love interest, is mysterious and now I want to know more about her, thank you Disney and Lucas Films. Could we please get another movie with Qi’ra? Is this what they are opening the door to? Solo learns from his “master” smuggler (remember there is always “one master and one apprentice”), Tobias Beckett, (played by Woody Harrelson) to, “Assume everyone will betray you, and you’ll never be disappointed.” Words he’s lived by ever since.

Now, the big event at the end of the movie, the big unexpected WOW, the return of Darth Maul. I knew he didn’t die, we all knew that. Rebels and The Clone Wars already establishes this fact. We also know that Obi-Wan eventually kills Darth Maul. Here’s my hope. Obviously an Obi-Wan film has been rumored for a long time. Everyone LOVED Darth Maul in The Phantom Menace. Let Obi-Wan and Darth Maul’s story line continue in the new films. Could this be their plan anyway?

Obviously my mind is running with all of the possibilities. Looking at the Rotten Tomatoes Scores of both films, there is a huge disconnect between critics and fans. Right now Solo has a 71% Fresh rating with critics and 57% with fans, whereas, The Last Jedi has a 96% with critics and 46% with fans. Did the critics inflate their ratings with The Last Jedi, just to stay on the “right” side of Disney? Is their slight disapproval of Solo a way to appease the audience? I really think Solo deserves a much higher score from both critics and fans.

No Disney, we are not trying the sabotage the franchise. We just want to be heard. I think Ron Howard did a fantastic job with telling the Han Solo story. There was some nostalgia to this film, that I didn’t feel with The Last Jedi.  There are no light sabers in this one, but I’m ok with that. There were a couple of scenes I thought didn’t work, like Qi’ra and Han’s reunion, but at least no one is floating in outer space like Mary Poppins.

Things I don’t want moving forward with this franchise 1. a Boba Fett movie. I never knew why there was so much interest in him anyway. 2. Stop putting out a new Star Wars film every six months. I think Disney and Lucas Films should have waited a bit before releasing Solo. Many still haven’t gotten over the disappointment they felt with The Last Jedi.

Ok, so I did also attend the press conference and I saw some pretty awesome things. I’m obsessed with Funko Pop! figures. As a matter of fact, I have a wall of Pop at my work. My students love them. As with most movie releases, there were so many new figures released with this film.

The highlight of the press conference for me was sitting on the Millennium Falcon with Chewie as my co-pilot. 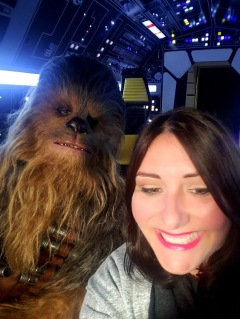 I got to see many amazing costumes from the film as well.

Overall, I really liked this movie. Were the story and acting perfect, no but it held my interests from start to finish. In essence, it was a cowboy movie in space, starring a much beloved scoundrel. I would give Solo: A Star Wars Story 4 out of 5 Pink Gerber Daisies.